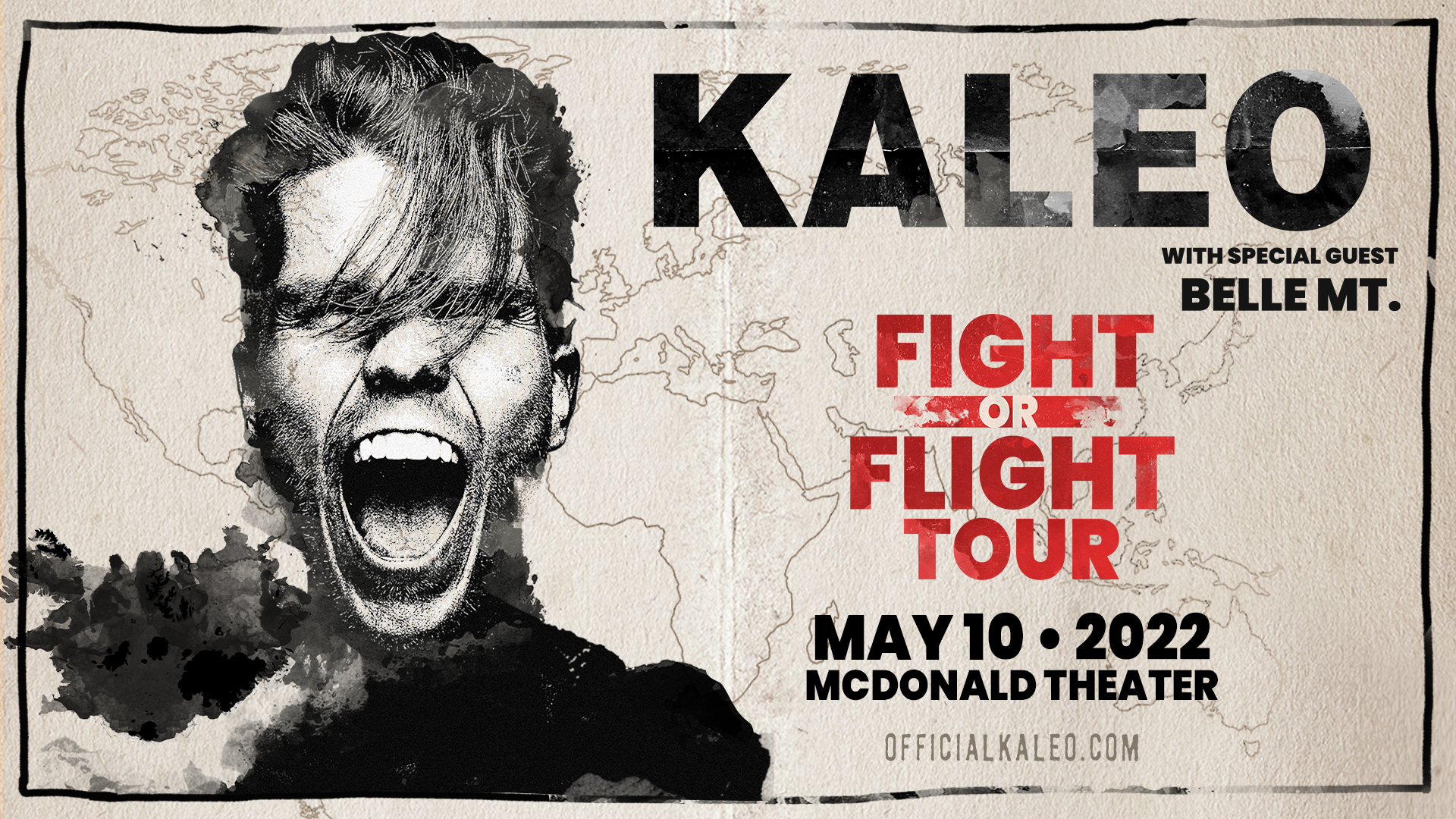 As the driving creative force behind KALEO, one of Iceland’s most successful musical exports, JJ Julius Son generally looks forward– to the next recording session, the next gig, the next source of inspiration. So, when asked to look back, he is truly moved by how successful and epic the journey has already been, just one album deep into his career on the international stage.

In just three short years, KALEO has scored a trifecta of global hits, including the churning No. 1 alternative track “Way Down We Go”; received a GRAMMY nomination for the hard-hitting strutter “No Good”; and watched its first album for Atlantic Records, 2016’s A/B, go gold. The band has toured the world, from sweaty nightclubs filled with diehard fans to mammoth crowds at Coachella, Bonnaroo and Lollapalooza. KALEO has even played vast stadiums, seducing thousands of Rolling Stones fans with its majestic rock sound, Julius Son’s towering, blues-inflected vocals and singular guitar licks. “Everybody else says look how far you’ve come,” says the singer-songwriter-multi-instrumentalist-producer of these milestones. “But you’ve got to walk every small step of the way, so it doesn’t feel like you’ve come that far because there’s so many steps.”

Every bit of that lived experience is packed into his next big step: KALEO’s latest album Surface Sounds (Elektra/Atlantic).

It is a sly title given the layers of meaning that it holds for Julius Son. From the found sounds of the “surface” around him that he interpolated into the songs—from birds singing to the ambient noise of Icelandic waterfalls—to the initial feelings that sparked each track, the 29-year-old sought inspiration in both the tangible world around him and the emotional one within. But there is more to it than that. “It’s a take on how much we tend to focus on the surface,” he says in a time where curation of image can feel more important than the depth of true human connection. “There’s so much more beneath that.”

KALEO eagerly dives into that deeper layer for the music on Surface Sounds. “This album has been such a puzzle for me,” says Julius Son of the collection of tracks recorded on the run while living out of suitcases. “I’ve literally jumped into studios in Greece, South America, and all over Europe creating what is now Surface Sounds. Any time I went home to Iceland, every time I was in LA, I enjoy seeing what we can create in the moment and in each environment.”

And clearly, the studio is a place he feels at home, fine-tuning his vision. “I’ve been writing the songs for such a long time and some of them I’ve lived with for a while,” he says. “But for me, the recording process is challenging. Some songs, you come in and you know exactly what to do. But others, you need the freedom to explore and see what happens. Sometimes you have to go the wrong way before you can take the right direction.”

That combination of globe-trotting and meticulous tinkering resulted in a spectrum of sounds. In an assembly line world of song manufacturing, Surface Sounds is refreshingly free of calculation, with Julius Son allowing each tune to dictate its path in the world from tracks that feel as intimate as the whispers of a lover in bed beside you to expansive rockers that feature a leonine roar that reaches to the stratosphere and could fill a stadium. (KALEO means “the voice” in Hawaiian and never has a band been more aptly named given the power of JJ’s pipes.)

The walloping guitar jam “Alter Ego,” which Julius Son calls “probably the most classic rock and roll song” on the album, makes clear that his roots run deep and that he has an eye to live performance. “It just has this energy that makes you get this excitement that you can’t really explain.”  Its musical and emotional flip side comes with the weary-yet-hopeful acoustic gentleness of “My Fair Lady,” with the singer slipping into the calming arms of his love.

That sense of contrast abounds on the album. “I feel like I’m always trying to work with the two sides,” he says, “The dark and the light.” That’s evident with songs like the fuzzy guitar rock of “Break My Baby” and its polar opposite, the sun-dappled and carefree “I Want More,” as Julius Son whistles his way down a country road, accompanied by those bird sounds he captured. A sweet tip of the cap comes in the form of the soothing “Into My Mother’s Arms.” While the whimsical “Hey Gringo,” finds Julius Son exploring a playful vibe and the sexy contours of his falsetto. “Sonically, that was a fun song for me because I was able to do string arrangements and work with the Dap-Kings,” he says of the soulful, swaggering rocker.

One of the album’s most striking songs, and surely one that will generate discussion, is the thunderous and anguished “Free the Slave,” which features some of Julius Son’s most searing, emotive vocals including some nerve-shattering howls.

The lyrics are abstract, but images of lynching evoke songs like Billie Holiday’s “Strange Fruit” and in these contentious times the title is intentionally provocative. Julius Son knows that some listeners may tie the song to race relations.

“That’s, of course, up to the listener,” he says, preferring to use his artistic freedom to further challenge audiences to examine tough social issues through their own lens. “I myself am an artist,” he says. “So, I know how freeing it can be to speak honestly and openly about things that bother me—that’s the liberty of art as, of course, I’m not saying that I’ve gone through those things directly, but I think in referencing history it brings forth a powerful image.”

The album’s variety of sounds and imagery, from lighthearted to solemn, comes naturally, says Julius Son. “I think that’s just me growing up as a musician and as a listener. I would get so bored if I had to do the same thing or have to be boxed in and told what to do. Artistically, there’s too many colors to just paint in black and white. So that’s just my creative process. I didn’t know that I could sing falsetto until I wrote ‘All The Pretty Girls’ and I didn’t really whistle until I wrote ‘Automobile.’ The songs cry out for a certain sound and then I have to go and serve the song.”

What he isn’t interested in is serving up the meanings behind the tracks, preferring to leave interpretation up to the listener. While certainly there are swaths of storytelling allusions scattered throughout—the brooding wall of sound balladry of “Backbone” sure feels like a soldier’s story and the urgent sense of menace pervading “Brother Run Fast” might be imparting a message about climate change—Julius Son is resolute in leaving things open.

“My favorite thing is that we, as individuals, do interpret music so differently,” he adds. “That’s what is so magical: watching how people listen and seeing these songs take on new meanings based on mood or the world around us.” In closing, he shares of the overarching concept of Surface Sounds, “I simply hope it makes you feel. If so, that’s amazing and goes beyond the surface.”

Belle Mt. [spoken bell-mont] is a project conceived by songwriter and lead singer Matt Belmont during a period of withdrawal from public performances and releases between 2014 and 2016. During this time, he dedicated himself to introspective periods of songwriting development, beginning a musical and geographical journey as he wrote, co-wrote and produced.

The climax of this initial 2-year endeavor of expression and development saw him retreat to a friend’s unfinished family holiday home to write in solitude at the foothills of the French alps. There Matt started experimenting with a new epic, cinematic sound mirroring his surroundings and the beautiful mountain views out of his makeshift studio window and beginning to build ethereal productions, developing the raw basis of a sound that would find its way into the hands of Nashville-based, Grammy award-winning producer Femke Weidema. As a former collaborator of prolific film composer Hans Zimmer, Femke’s production reflects a deep knowledge of rich layering & the creation of dramatic soundscapes.

The sounds of the first EP could be summarized by deeply poetic lyrics and alt-pop melodies steeped in layered ambience and depth. Working out of home project studios on a shoestring budget, eight songs were written and demoed in that first 10-day trip, and the haunting lead-track ‘Hollow’ was born.

Performing live as a 3-piece, the epic productions have been delivered to audiences on lineups, which range from British Summertime Hyde Park with Bruno Mars and Khalid to Popfest Dusseldorf with Macklemore and Clean Bandit. A combination of the powerful and intricate beats of Chris Burgess on drums/percussion and Ben Worsley’s swirling ethereal guitar sounds added to Belmont’s emotive vocals, synth and acoustic guitar have been captivating audiences worldwide.