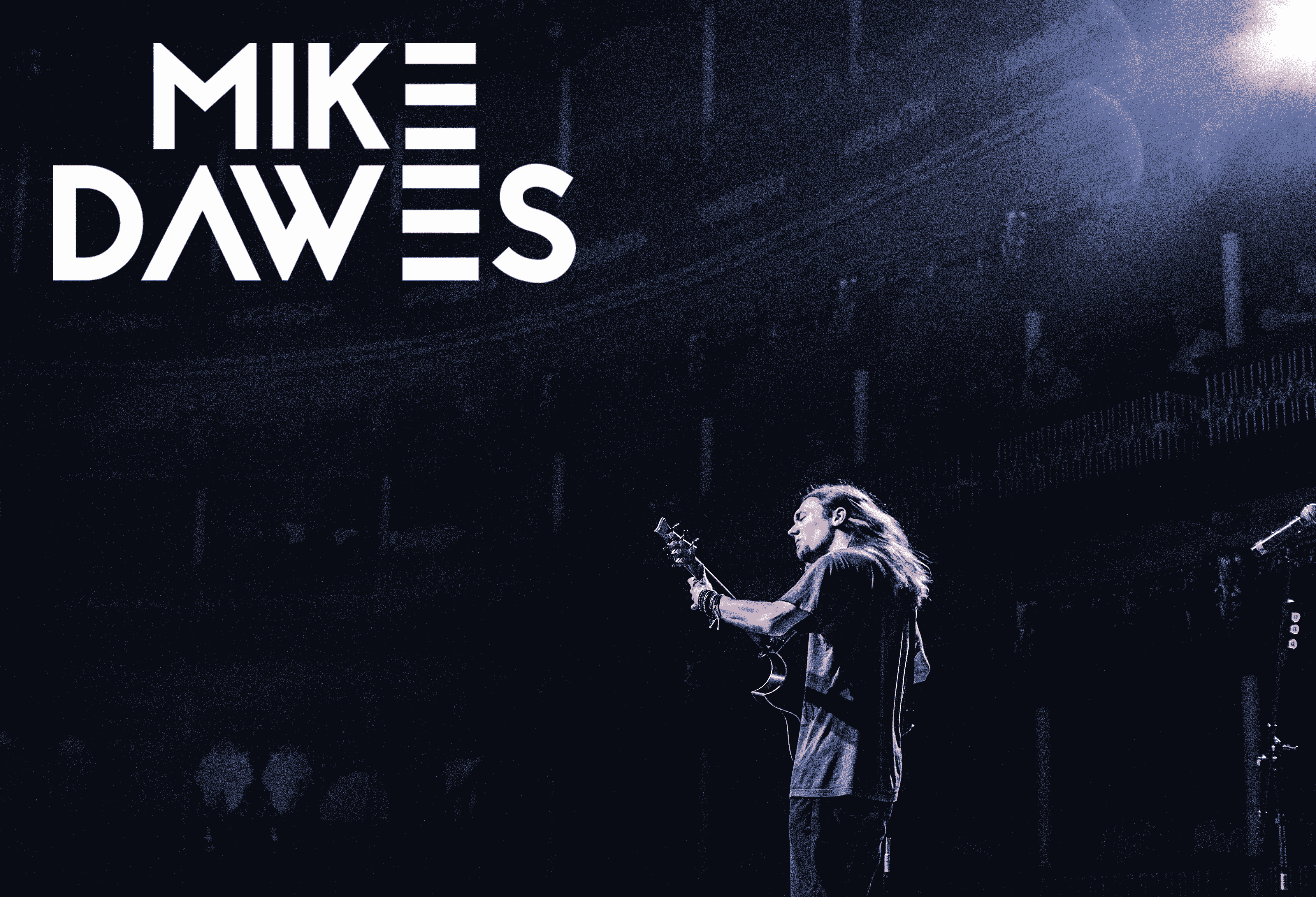 Mike Dawes is an English guitarist known for composing, arranging, and performing multiple parts simultaneously on one instrument. He is hailed as one of the world’s most creative modern fingerstyle guitarist with a repertoire spanning solo viral video hits alongside mainstream chart success performing with Justin Hayward from The Moody Blues. Dawes was named “Best Acoustic Guitarist in the World” by Total Guitar Magazine / MusicRadar in both December 2017 and 2018 readers polls.

Dawes’ recent solo album, ERA, spawned a viral hit with his arrangement of “One” by Metallica that has over 4 million YouTube views. His debut record, “What Just Happened?”, featured the fan favorite original, “Boogie Slam” and another viral hit with the Gotye song, “Somebody That I Use To Know” with almost 5 million YouTube views. Dawes is also featured on multiple Justin Hayward live releases such as​ Spirits…Live​, which debuted at #2 on the US Billboard Chart. Dawes also a strong reputation as a music educator, acting as a columnist for Guitar World and Acoustic Guitar as well as teaching multiple guitar workshops all over the world. In addition to touring North America and Europe with Justin Hayward, Dawes has also toured with fingerstyle guitarists such as Andy McKee and Tommy Emmanuel. Dawes has also been a part of several ‘International Guitar Night’ tours.

“Music” isn’t something that was invented. Nobody can take credit for it. It’s always been here; an esoteric force with the ability to crystalize passing moments into lasting memories, and to forge new connections for any within earshot, be it to another person, a feeling or the cosmos. Picture a young kid who’s trying to figure out whistling through her own whiffs and hisses as cars whizz by on the interstate while she walks home from school, or the 72-year-old widower whose eyes well up with tears when he hears the first notes of his wedding song on the radio while he’s out to dinner with his grandkids. Or imagine a hushed audience comprised of different backgrounds, ages, nationalities and beliefs standing side-by-side in a shared serenity, all facing a man on stage with a guitar as the final notes of his song ring through the air.

It is moments and experiences like these — the precious beauty that’s discovered amongst the screaming chaos of everyday life — that artist Trevor Gordon Hall commits his mind, heart and fingers to. Whether it’s through his compositions, collaborative live performances, musical education, or basic interactions, Trevor is on a journey to enable engrossing musical possibilities, both communal and intimate, for people all around the world.

Through his work, Trevor has established himself as a unique and pioneering voice on the international stage, albeit one who speaks through his guitar and every sound that it’s capable of, rather than words. On top of a touring calendar that’s taken him through 17 countries and counting, his discography has amassed millions of listens and views through streaming services such as Spotify and YouTube, allowing his music to connect meaningfully with listeners across all borders, regardless of their language or location.

Since emerging on the fringe of the Philadelphia, USA, music scene as a young guitar virtuoso in the early 2000s, Trevor’s fingerpicking style of textured instrumentalism took little time to leave an impression on listeners. He was rated a top 30 under 30 guitarist by Acoustic Guitar Magazine and has shared the stage with or drawn praise from peers and guitar legends who helped blaze the path before him, including the likes of John Mayer, Steve Miller, Graham Nash, Steve Hackett, Dar Williams, Will Ackerman, Pat Martino, Stanley Jordan, Phil Keaggy, Tommy Emmanuel, Pierre Bensusan and Andy McKee to name a few. He’s also been featured on NPR, NBC, PBS, and many international outlets and publications around the world.

Trevor’s musical style is difficult to describe with words, and that’s partly what makes it so relevant. While he is a gifted guitarist capable of elaborate technicality, his compositions put expression and experience first, rather than technique for technique sake. He’s always striving to strike a chord that’s somewhere between adventurous and accessible. Many of his works are driven by highly textured soundscapes that engulf the listener in melody and rhythm, while others carve out a space for reflection and stillness. Rather than a genre or style, think of Trevor’s music as the sound of a man who is continually exploring every nook and cranny of his guitar for a new sound or a new way to connect meaningfully with big ideas in ways that others can relate to. It is experiential music that could be the soundtrack to your morning walk as the sun rises, lighting you up with inspiration for the day ahead. It could be the meditative melody that helps one maintain precision in their work, whether that’s delivering packages around town or performing open-heart surgery. It’s music that doesn’t tell you what to feel, but instead invites you to feel.

Ages: Minors must be accompanied by a Parent or Guardian