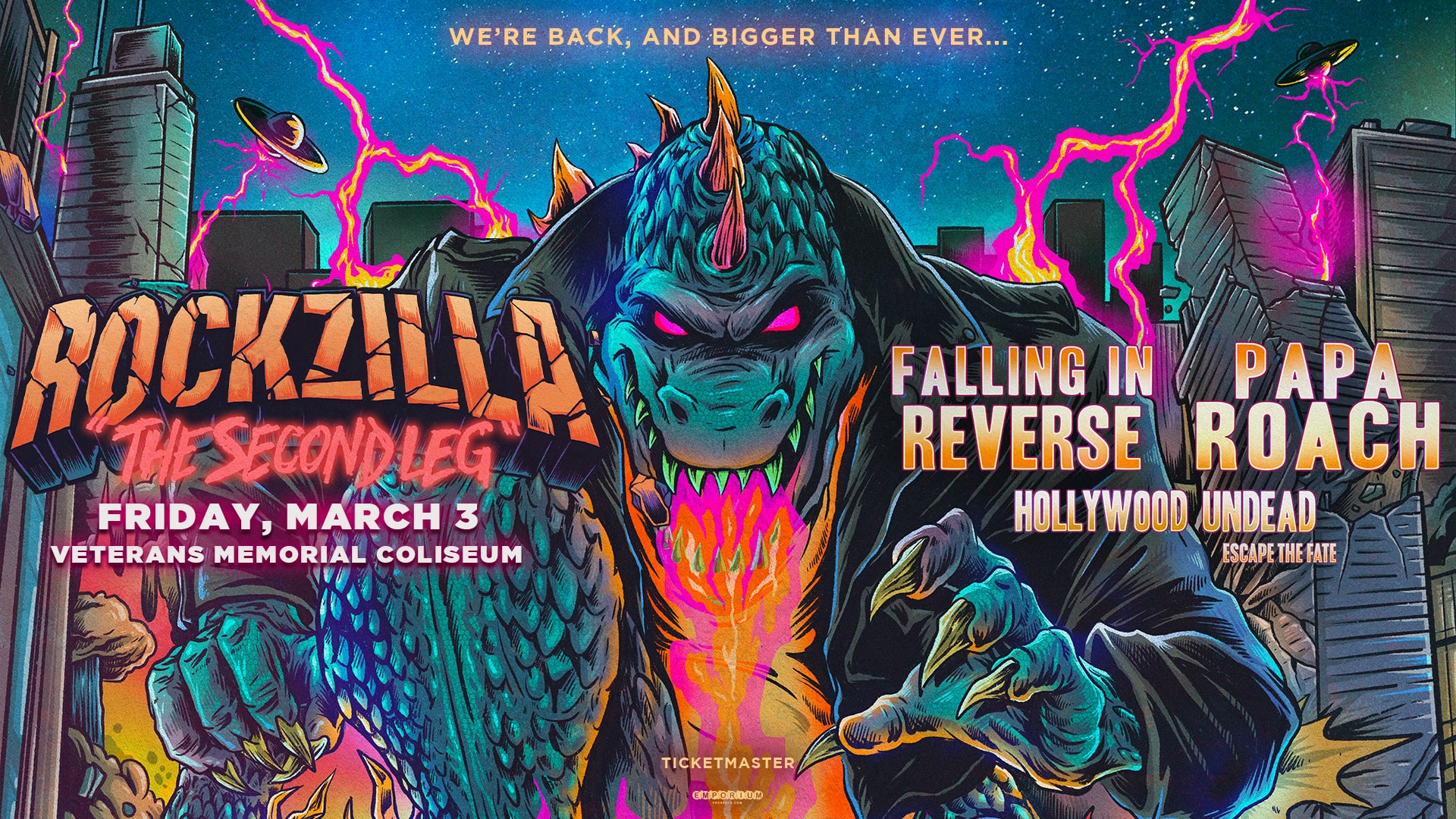 About Falling in Reverse:

Platinum-selling rock band Falling In Reverse, lead by outspoken and charismatic singer Ronnie Radke, have been completely dominating the radio and streaming space in this new decade. The band, which formed back in 2008 and built itself as a mainstay of the Warped Tour scene while gracing many Alternative Press covers, has seen its latest single “Zombified” hit No. 1 Billboard’s Hot Hard Rock Songs Chart. The band has also been generating nearly 50 million total streams per month. Falling In Reverse’s previous chart-topping single “Popular Monster” earned platinum RIAA status. The track is truly a juggernaut and is a watershed moment for the band. “Popular Monster” has been streamed nearly half-a-billion times and has emerged as one of the biggest anthems of the past several years. It enjoyed a multi-week stint at No. 1 on the rock radio charts, landing in the top spot on the Mediabase Active Rock Chart, Billboard’s Hot Hard Rock Chart, and the Nielsen Rock Chart, and marked the first No.1 single of the band’s career. It followed the gold certification of the band’s 2011-released debut album The Drug in Me Is You and a sold-out anniversary tour. During the shutdown that was a result of the COVID-19 pandemic, Radke quickly established himself as one of the most popular musicians streaming on the Twitch platform. In Winter 2022, the band returned to the road and embarked on the sold-out “Live From the Unknown” tour, further cementing its status as one of the top live draws in the genre. Falling In Reverse have continued to catch the eye of the press, with their career arc being spotlighted by top-tier, tastemaking publications such as Forbes, Billboard, New York Times, Pitchfork, and beyond.

Papa Roach are two-time GRAMMY-nominated, Platinum-selling leaders in Alternative Hard Rock music, with more than 10 multi-genre hits in three different decades. The iconic band, now over 20 years into their career, continue to forge a path with their own brand of innovative Rock music, with global success. Their latest album ‘EGO TRIP’ released April 8, 2022, via the bands relaunched independent label New Noize Records.

Formed in 2005, Hollywood Undead inched towards mainstream dominance under the radar with unprecedented success for a modern band. Preceding the current playlist-hopping genre-less boom, they defied stylistic boundaries from day one integrating rap, rock, and electronic. The band will be heading back out on the road in 2023 for the second leg of the ROCKZILLA tour with Papa Roach, Falling In Reverse & Bad Wolves in support of their recently released 8th studio album, Hotel Kalifornia.

ESCAPE THE FATE is a three-word phrase synonymous with heavy rock n’ roll and hooks, post-hardcore with weight, and unrelenting genre-redefining anthems built for diverse audiences. Over a decade into their young career, they have proven to move crowds equally at major rock radio festivals, the legendary Vans Warped Tour, or on the road with Five Finger Death Punch.

CHEMICAL WARFARE is the sound of a band that’s more comfortable in their own skin than ever, recharged for the next era of their career, reinvigorated, and redefined, without losing any edge.

“I hope that people think of Escape The Fate as a good time, but a good time in a better way,” singer Craig Mabbitt explains. “We want people to connect deeply with the music and disappear in it. Get lost and then return from the album, or show, feeling inspired about themselves. We want to make people feel better about life, to know they can take on all of its hardships. That’s what the music does for us as a band. That’s what we want it to do for the audience, too.”

Mabbitt, Thrasher, TJ Bell, and Robert Ortiz have each been making music, and on the road, before they were old enough to drive. ESCAPE THE FATE is poised to shatter all preconceived notions about the past, with a bold step forward into their future. It’s not their storied and beloved music, which regularly captures roughly 2 million listeners across streaming services each month, that requires any distance. It’s the decadence, drama, and retrograde “bad boy” image that they’ve left in the dust.

An authentic, visceral, and electric connection with the audience is the heart of what ESCAPE THE FATE is about. The guys in the band understand what it means to be broken, from childhood trauma, to the tumultuous downsides of the music business. They know how music can heal.

It’s what has made the band’s message transcend any sense of “difference” in genre, all around the world, touring with Avenged Sevenfold, Godsmack, Papa Roach, I Prevail, Bullet For My Valentine, Hollywood Undead, HELLYEAH, All That Remains, and on multiple Vans Warped Tours. The tangible passion and energy of the music and lyrics transcend language and culture, whether ESCAPE THE FATE performs at Rock on the Range, Graspop Metal Meeting, or Rock am Ring.

Smashing forward with the momentum from Billboard Top 5 Independent Album Hate Me (2015) and I Am Human (2018), which produced the Top 20 Billboard Mainstream Rock single “Broken Heart,” the four men of ESCAPE THE FATE have crafted an ambitious third entry to what could certainly be described as their most powerful trilogy of albums. Made together with A-list producer John Feldmann (Panic! At The Disco, 5 Seconds Of Summer, The Used) and co-produced by Kevin ‘Thrasher’ Gruft (ETF guitarist and production pro in his own right), CHEMICAL WARFARE delivers an arsenal of driving bangers and melodic ballads, among the best of the hard rock world. Thrasher has been working with the likes of Machine Gun Kelly and Travis Barker on other projects and running from studio to studio to create new music. His packed production schedule in recent times has greatly sharpened his skill set, making CHEMICAL WARFARE a real show of his musical strength.

Ortiz is a big fan of megastar violinist Lindsey Stirling, so the band were elated when she accepted their invitation to contribute to one of their songs. “She is an angel – she has so much light in her.  But the primary reason I wanted to work with her… strictly speaking musically, she is gnarly – her music is epic,” adds Ortiz. Travis Barker, best known as the drummer for blink-182, makes a handful of appearances as well. Songs like “Lightning Strike,” “Not My Problem,” “Hand Grenade,” and “Invincible” are destined to take their place alongside classic ETF anthems like “One for the Money” and “The Flood.”

ESCAPE THE FATE have always emphasized diversity in their sound. Each record seamlessly blends soaring melodic hooks, powerful riffage, shredding solos, and some of the most instantly recognizable drumming in the genre, with Mabbitt’s heartfelt, authentic, lyrical missives on top.

ESCAPE THE FATE conquered the burgeoning metalcore scene on the strength of their breakout album, This War is Ours (2008), which led to a major label deal and the rock crossover success of Escape the Fate (2011), produced by hitmaker Don Gilmore (Linkin Park, Korn, Avril Lavigne). The album hit No. 1 on Billboard’s Hard Rock Albums, the first of three ESCAPE THE FATE records to debut at No. 1 or two on that chart. Ungrateful (2013) boasts the roaring “You’re Insane.” Hate Me is equally defined by stunning singles like “Just a Memory” and “Remember Every Scar.”

I Am Human, released in 2018, marked the band’s second collaboration with GRAMMY® Award-nominated producer Howard Benson (My Chemical Romance, Skillet, Seether). That album saw fan-favorite songs like “Empire” and “Do You Love Me?” added to the ETF songbook, but it was the title track that really blew down the doors, heralding the new chapter begun on CHEMICAL WARFARE.

“I started doing this because music was my ‘escape’,” says Mabbitt. “I was running from unresolved feelings or chasing things away with a bottle. But music was always there for me. The whole experience of making CHEMICAL WARFARE, while reflecting on the other records; it was a beautiful realization to contemplate the power of music. It’s been such an escape for so many people that it puts me in my place. I become so humbled. I’m so grateful, not only that I’m still alive, but that I can get this music out of my head and that it will hopefully help some other people, too.”

It may be the same guys, with the same name, but it’s a brand-new ESCAPE THE FATE. “We get up on that stage, we go into the studio, for different reasons now,” Mabbitt insists. “Throw out everything you thought you knew about this band. CHEMICAL WARFARE is a new beginning for us.”