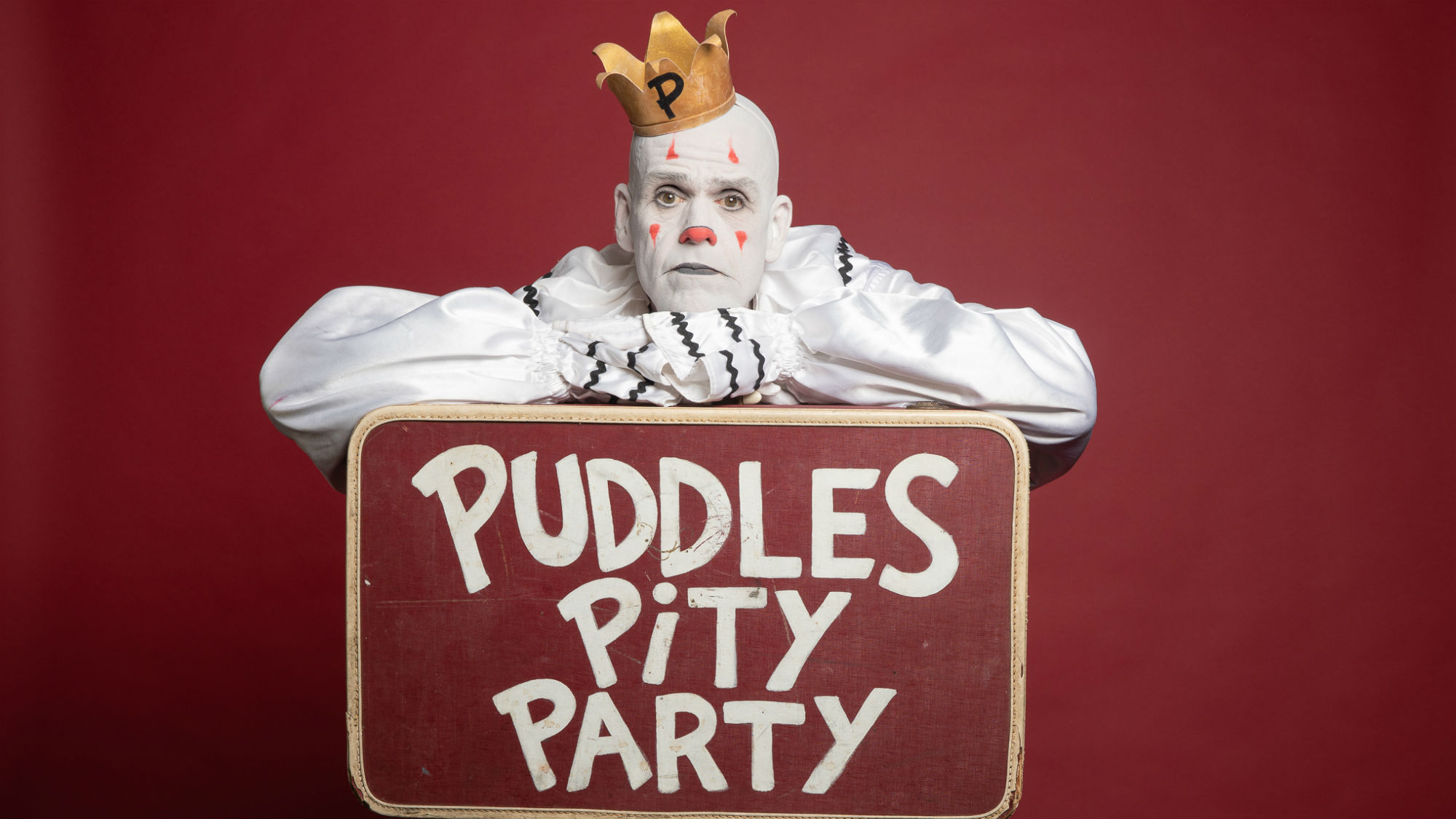 Swyer Theatre at The Egg

Your ‘Sad Clown with the Golden Voice’ is here with a BRAND NEW set of emotive anthems,
and this time he is packing his suitcase full of hope. Puddles is hopin’ for harmony and
happiness around the planet. That’s a tall order for most, but this giant clown is willing to
do his part one lingering hug at a time.
A veritable “Pagliacci by way of Pee-Wee Herman and David Lynch” (The AJC), Puddles Pity
Party has over 619K YouTube subscribers and over 200 million views for indelible
interpretations of classics by the likes of ABBA, Bowie, Cheap Trick, SIA and Queen along
with his unforgettable rendition of the smoosh-up “Pinball Wizard/Folsom Prison Blues”.
You may recognize him as a quarter finalist on Season 12 of America’s Got Talent and a
contestant on the 2020 season of AGT Champions, as well as his viral video collaborations
with Postmodern Jukebox. Puddles continues to wow audiences at his on-going residency
at Caesars Palace, and he tours extensively in the US at legendary venues like the Palace of
Fine Arts in San Francisco, the Kennedy Center in D.C., The Vic in Chicago and the
Troubadour in Los Angeles. Puddles has toured internationally through Europe, Canada,
Australia and Mexico. He has also performed many times in the UK at Soho Theatre London
and the Edinburgh Fringe Festival. Other worldwide festival appearances include the
Adelaide Fringe Festival, Perth Fringe World, Melbourne International Comedy Fest, Just
for Laughs Montreal, Belgium’s Gent Festival, Outside Lands (San Francisco), Festival
Supreme (LA), Bumbershoot Festival (Seattle), Moontower Comedy Festival (Austin), and
Bethlehem’s MusikFest

Dave Hill is a comedian, writer, musician, actor, radio host, and man-about-town originally from Cleveland, Ohio but now living in New York City in a totally sweet apartment with a party deck and everything. Hot chicks come over to hang out and eat cheese plates and stuff with him all the time and it’s awesome.

Anyway, on the show business front, Dave has appeared on Netflix’s The Unbreakable Kimmy Schmidt, Adult Swim’s Joe Pera Talks with You Amazon’s The Tick, Comedy Central’s @midnight and Inside Amy Schumer programs, TBS’ Full Frontal with Samantha Bee, TV Land’s The Jim Gaffigan Show, and TruTV’s Comedy Knockout among a bunch of others. He is a frequent on-air host for HBO and Cinemax and has been on channels like MTV, VH1, BBC-America, and the Sundance Channel a whole bunch too. Dave also starred in his own television program The King of Miami on the Mojo Network, which was cancelled even though Dave really liked it. The show also aired in the United Kingdom on Sky TV’s Film24 Channel. And you can still watch The King of Miami on Hulu too, which Dave is super pumped about. Oh, and Dave was a correspondent on Hoppus on Music starring Blink 182’s Mark Hoppus on the Fuse channel, which ruled. Dave has been on other shows and in obscure movies too but let’s keep moving for now.
Dave performs live comedy over the world and has appeared at such festivals as the Melbourne International Comedy Festival, SXSW, San Francisco Sketchfest, the Edinburgh Fringe Festival, the U.S. Comedy Arts Festival in Aspen, Sasquatch Festival, Bumbershoot, Bonnaroo, the Bridgetown Comedy Festival in Portland, the Crap Comedy Festival in Oslo, Outside Lands in San Francisco, and then some other ones too. He has also performed comedy at Sing Sing Correctional Facility twice and even ripped some guitar solos inside a Mexican prison a couple times too. In 2007, Variety magazine named Dave one of their “10 Comedians to Watch,” something he still won’t shut up about. Some things are hard to let go of.

Dave hosted his own radio show The Goddamn Dave Hill Show on WFMU in Jersey City, New Jersey every Monday night from 9pm to midnight for years and now hosts the podcast Dave Hill’s Podcasting Incident, which is also broadcast on the UK’s Fubar Radio, So…You’re Canadian with Dave Hill, and History Fluffer, on which he is joined by Jim Biederman, Jodi Lennon, and Chris Gersbeck. Dave is also a frequent contributor to public radio’s Live from Here with Chris Thile and  This American Life. He has also appeared on podcasts like WTF with Marc Maron, The Adam Carolla Show, The Nerdist, and then roughly 78 other ones besides those.

Dave is the author of three books, Parking the Moose (Doubleday Canada/Penguin Random House 2019), Tasteful Nudes (St. Martins Press, 2012) and Dave Hill Doesn’t Live Here Anymore (Blue Rider Press 2016). He has also written for the New York Times, GQ, Salon, The Paris Review, McSweeney’s, New York Observer, The Cleveland Plain Dealer, VICE, Guitar World, and a bunch of other places too. Comedy legend Dick Cavett called Dave “a major figure among American comic writers, past and present,” which is pretty much the coolest thing that has ever happened as far as Dave is concerned.

Dave is also a musician who currently sings and plays guitar in the power pop band Valley Lodge, whose song “Go” is the theme song to HBO’s Last Week Tonight with John Oliver, and the psych/garage rock band Painted Doll. He was also a member of Cleveland rock bands Sons of Elvis and Cobra Verde as well as Diamondsnake, a heavy metal band with Moby. Additionally, Dave has played guitar for Walter Schreifels and muscle metal band Thor and bass for Lucy Wainwright Roche and former Faith No More singer Chuck Mosley. He also contributed musical scores to films such as Dirty Deeds, Shoot First and Pray You Live, and then some other ones besides those two.

Additionally, Dave’s mostly imaginary Norwegian Black Metal Band Witch Taint is currently bringing its own disturbing brand of comedy and music to audiences all over the world after having existed merely as an absurb email chain for over a decade. They’ve also sold a lot of T-shirts.

Dave has made out with a lot of chicks, is sweet at guitar, and smells really great. You can ask anyone.